No, doubling the paper speed will not reveal hidden P-waves

Apparently I went to the Rick Bukata School of Titling Articles.

A 22-year-old male presents with agitation and delirium after smoking an unknown substance that an equally unknown person on the street offered him. You note a rapid radial pulse at around 150 bpm and attach him to the cardiac monitor:

Well now we’re in a tough spot. It’s difficult to tell whether Fig. 1 shows sinus tachycardia or some non-sinus narrow-complex tachycardia (we’ll use the colloquial shorthand of “SVT” to include all those other options on the differential, including AVNRT, AVRT, ectopic atrial tachycardia, junctional tachycardia, etc…). If it is indeed sinus tach, then the requisite P-waves must be those upright deflections in II and III and superimposed on the T-waves.

Is there something we could do to see if those really are P-waves buried in the T-waves?

If you’re like me, you were probably taught that it would be a clever move to double the paper speed in a situation like this to separate the P’s from the T’s, revealing the diagnosis of sinus tachycardia. Let’s see what happens when we do that.

Figure 2. The same rhythm strip as Fig. 1 but performed at double the paper speed (50 mm/s). [Note: this is only the first 5 seconds of the full 10-second strip. Since the paper’s going twice as fast, a 10-second strip at 50 mm/s ends up twice as long, which is a bit unwieldy for posting.]

We still can’t distinguish P-waves from the T-waves..

Then this must be SVT, not sinus tachycardia!

[Spoiler] But this is sinus tachycardia!

It turns out that changing the paper speed does nothing to reveal waves buried in the ECG. I’ll admit, I used to think it would help too since several instructors suggested it would and I never bothered to try it out. Five years ago I even included it in my first list of pointers for spotting 2:1 atrial flutterâ€”a tip I’ve since redacted. The rationale for why this maneuver’s not helpful has to do with the simple reason why ECG waves end up superimposed in the first place:

There are two events happening at the same time!

A P-wave ends up on top of a T-wave when atrial de-polarization and ventricular re-polarization occur simultaneously. No adjustment to the paper speed is going to change that fluke of timing. It doesn’t matter if the paper if going 10 mm/s or 100 mm/sâ€”if the P-wave is happening at the same time as the T-wave, they’re always going to be superimposed on the ECG.

Let’s look at the normal-speed tracing from Fig. 1 again, but this time I’m going to crop it so that we only see the first half of the strip:

Figure 3. This is identical to Fig. 1 except cropped to show only the first 5 seconds.

Now, rather than changing the paper speed, I’m going to stretch the image above by doubling its width.

Figure 4. This is the same image as Fig. 3 but stretch horizontally to double the width.

We can now compare our true double-speed printout (Fig. 2) with this simulated version (Fig. 4). It turns out they are absolutely identical.

Another way of understanding this is that all of the information contained on the 50 mm/s strip is already available on the standard 25 mm/s strip. Running the paper at double-speed does nothing to uncover “hidden” complexes since every aspect of the ECG is stretched equally.

What it does succeed at, however, is making ECG interpretation more difficult for providers who don’t usually reading tracings at 50 mm/s (probably 99% of our readers and certainly all of our editors). Outside of the electrophysiology lab and a few countries where 12-lead printouts often include a 50 mm/s rhythm strip, these sorts of tracings are a rarity. And since most of ECG interpretation comes down to pattern-recognition, changing the speed of even simple tracings interrupts all the mental shortcuts we’ve spent years buildingâ€”forcing experienced providers to approach double-speed tracings with the deliberate, uncertain, and unpracticed eyes of novices.

While it’s possible to read ECG’s that way, it’s not fun.

The trick we do suggest in this situation isn’t that tricky: run a 12-lead.

Figure 6. 12-lead ECG run simultaneously with the prior rhythm strips.

V1 in the ECG above confirms that, without a doubt, those are P-waves we are looking at in the T-waves. Their timing raises another issue however: The Bix Rule suggests that whenever you see P-waves positioned halfway between R-waves, you need to worry that there could be hidden P-waves buried within the R-waves as well.

Figure 7. Blue arrows denote P-waves, while red arrows show where buried P-waves could be hidden as predicted by the Bix Rule.

Thankfully, given a short period of time, in a case like this it’s pretty easy to rule-in sinus tachycardia since it will usually respond to management of the underlying condition. The patient was treated with a small dose of lorazepam and supportive care and a repeat tracing run about 15 minutes later.

Figure 8. 15 minutes later, it is now clear that we are dealing with sinus tachycardia.

For the curious, I’ve also printed the rhythm from Fig. 8 at double-speed.

Figure 9. The same strip as Fig. 8, this shows sinus tachycardia at double-speed.

Figure 10. This 12-lead, again confirming sinus tachycardia, was performed simultaneously with the rhythm strips in Fig. 8 and 9.

So, the next time someone tries to be clever and identify sinus tachycardia by printing a 50 mm/s rhythm strip, be extra clever and don’t waste your time. There’s no workaround for superimposed complexes and unless you’re in the EP lab, a tracing at standard speed has all the information you could possibly need.

After sharing this on various social media platforms I was glad to see a bunch of comments from readers suggesting that running a Lewis lead rhythm strip might have a role here. The Lewis lead is a relative of V1 (though definitely not identical), and since V1 is our best lead for picking out P-waves on that first 12-lead (Fig. 6), it makes sense that the Lewis lead should offer a similarly useful view of the atria. I didn’t mention that option in my original article for two reasons: 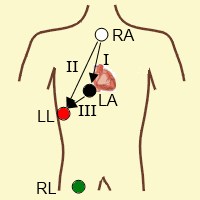 For more information on how to obtain the Lewis lead and some examples of situations in which it might be helpful I suggest starting with the posts below: