HyperK and Shades of Grey: Myths and Facts about Hyperkalemia Part II

Today we continue our discussion about the myths and facts of hyperkalemia with Dr. Brooks Walsh, author of the Mill Hill Ave Command blog. We also feature contributions from Dr. Stephen Smith, of Dr. Smith's ECG Blog.

If you would like to refresh your memory on Part I visit here.

Dr. Walsh and I spoke about why he thought hyperkalemia presented such a challenge for EMS providers:

"The recognition and treatment of hyperkalemia is one of those areas in medicine where, despite strong and clinically relevant results in the literature, the "usual practice" keeps kicking along. This is like a lot of areas in medicine, true."

With that said, let us continue with Myths and Facts about Hyperkalemia Part II:

Myth: The ECG shows a predictable sequence of changes as the potassium level increases

Experiments done on (presumably) healthy animals demonstrated a progression in ECG derangements as potassium levels were experimentally raised. A number of textbooks and review articles repeat this result, even though numerous human clinical studies have failed to replicate a linear relationship between the potassium level and specific ECG findings.

For example, one review article, much referenced in the EM literature, presents a table describing the correlations between potassium levels and expected ECG findings. 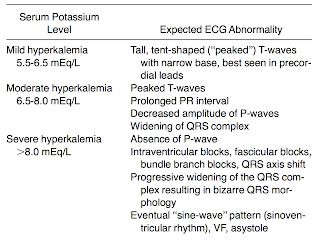 But the literature is full of case report that argue against such tidy correlations: here's a case of a woman with a potassium of almost 8, and complete AV block  but no QRS widening or T-wave tenting; here is a similar case with a K of 7.5; we even see that a patient can develop an AV block with a K level of just 5.5! On the other hand, here's a case of complete AV block with a narrow QRS, but a potassium of just 6.4.

We asked Dr. Stephen Smith about his experiences with this issue. He agreed and said he has seen patients go into VF after having only peaked T waves. You can see examples of this here.

So it seems better to avoid thinking that you can determine a specific potassium range on the ECG, but rather that it can suggest a generally elevated level. Any of the "expected ECG abnormalities" can occur at any level of potassium.

Myth: Calcium is a dangerous medication

Make no mistake – IV calcium can be a potent drug, but with potential benefits. And you should always refer to your local guidelines/protocols for the last word on when you can & should give it.

But that being said, there is some concern voiced by clinicians about administering "one mustard box." Let's talk about 2 big concerns that people seem to have with giving calcium: skin necrosis and digoxin toxicity.

So, how worried should you be about skin necrosis? EMS usually carries calcium chloride, which has some potential to cause problems if it extravasates (calcium gluconate has a lower risk, and can be given subcutaneously for some problems). As a result, many people have a lot of concern about administering the medication, fearing the risks if the IV leaks or fails.

Well, yes, you must assure yourself that you have a patent, free-lowing line in a big vein! But on the other hand, you have already been taking risks with injecting dextrose 50% and sodium bicarbonate, as both are known to cause skin necrosis.

This patient came into the ED with hyperkalemia, and was treated with IV insulin and dextrose (no calcium).

Or how about this hand?

That's a neonate who was getting a D10% drip in his hand.

There are a small number of case reports of bad calcium extravasations, but that rare risk must be balanced against the immediate, and unpredictable, risk of life-threatening arrhythmias.

Some EMS-toxicologists may also point to the historical concern with digoxin toxicity, that calcium infusions could provoke a "stone heart," or cardiac tetany. A recent pig study had cast a lot of doubt on that thinking. And then a retrospective study was published in 2012 by Levine et al., which looked at patients with digoxin toxicity, some of whom were also treated with calcium. They found no effect on mortality – no "stone heart ' – and another myth was dispelled.

So you should feel comfortable giving calcium when you think you're dealing with hyperkalemia. But don't just take my word for it – listen to some medical experts!

For example, from a nephrology paper:

"When uncertain of the importance of a raised potassium level, it is prudent to go ahead and administer calcium gluconate, as the downside risk is minimal."    Aslam 2002

"[G]iven the fact that calcium therapy is benign… when I suspect hyperkalemia I just given calcium immediately, even before I get the potassium back. … There are so many ways the ECG can manifest with severe hyperkalemia — life-threatening hyperkalemia. Again, the treatment is benign, and cheap! So how many life-threatening diseases can you treat benignly and cheaply?"

You can hear Dr. Smith expand on this by listening to him on  EMCRIT podcast 42.

Practical point: How to give albuterol for hyperkalemia

Albuterol may in fact have a role in the prehospital treatment of hyperkalemia. It works by shifting potassium from the serum into the cells.

"Growing evidence suggests that there may be a role for albuterol in the treatment of patients with severe hyperkalemia…β2 agonist administration was found to be safe and was associated with a significant decrease in serum potassium levels. Therefore, β2 agonist therapy should be considered as an adjunctive treatment for patients with severe hyperkalemia."

"In the doses used, nebulized albuterol therapy resulted in a prompt and significant decrease in the plasma potassium concentrations in patients on hemodialysis, and caused no adverse cardiovascular effects (Allon).

You can use an albuterol in a nebulizer, or can use levalbuterol if that's what you have (Pancu). And it doesn't have to be a neb – it can also be an MDI with a spacer (Mandelberg).

But how much to we give? Of the medics who are savvy enough to want to use Albuterol to treat hyperkalemia, few of them know the effective dose needed to treat.

Perhaps you realize that the "standard dose" we use to treat bronchoconstriction is 2.5mg/3ml. It is problematic to consider loading at least 4 doses into a small volume nebulizer. That's not really going to work.

Albuterol does come prepared as 2.5 mg/0.5ml. Now we are talking about 2 ml's, which is much easier to manage and a better choice for treating hyperkalemia.

Is it worth stocking multiple doses of Albuterol? Perhaps. It is not going to be the first line treatment for hyperkalemia, so the decision will vary by system. Needless to say, if you are going to treat with Albuterol, make sure you have an effective way to do it.

We hope you have enjoyed this short series on the Myths and Facts about Hyperkalemia.

My thanks again to Dr. Brooks Walsh, as well as Dr. Stephen Smith for their valued contributions.

As usual, all comments and opinions are encouraged!

COVID-19 and the Protests