An 81 year male presents to the fire station to have his blood pressure checked.

He tells the paramedics he had just finished a round of golf and was sitting in the clubhouse when he felt “cold and shaky.” He states that he went out to his car, rolled up the windows in the warm sun, but still felt cold. That’s when he decided to drive to the fire station to have his blood pressure checked.

It’s Saturday and most of the firefighters are outside performing yard maintenance. The EMT who greets the gentleman and assesses his blood pressure does not find the story to be particularly troubling.

His BP is 120/70 and his pulse is 76 and regular; consistent with the other vital signs recorded on his card over the past few weeks. When he left the fire station he did not appear acutely ill.

Two hours later an ambulance is dispatched for difficulty breathing.

The EMT who assessed the blood pressure recognizes the gentleman who greets the ambulance at the side of the road. The patient states that he contacted his physician who was out of town and the on-call physician advised him to call 9-1-1.

The man was helped into the back of the ambulance and undressed from the waist-up. A surgical scar is noted down the center of his chest.

Medications: The patient does not recall the names of the medications.

His vital signs are assessed.

He states that “nothing has really changed” since he was at the fire station.

When asked about shortness of breath, he denies it.

The cardiac monitor is attached.

When specifically asked about chest discomfort he states, “Well, I do a little bit of chest pressure, but it’s nothing like when I had my heart attack.”

What is your impression?

At first glance the ST-elevation in the inferior and low lateral leads isn’t that impressive, at least when compared to many of the other cases we’ve seen. However, this is an impressive amount of ST-elevation when compared to the small size of the QRS complexes! This is known as the rule of proportionality and it’s critically important when it comes to STEMI recognition!

Perhaps more impressive is the ST-depression in the right precordial leads (V1-V3). These are reciprocal changes to posterior extension of this acute inferior STEMI. If this was the only abnormality on this ECG I would still call it STEMI! If you want to get really good at identifying acute isolated posterior STEMI, pay attention to the right precordial leads whenever you have an acute inferior STEMI. These changes will often be present.

Of course, you already knew that the ST-elevation in the inferior leads indicated STEMI. Why? Because of the downsloping ST-segment in lead aVL! This is the “go to” lead to rule-in acute inferior STEMI! It’s so sensitive that absence of this finding should make you question the ECG diagnosis of acute inferior STEMI.

The patient was sent to the cardiac cath lab where angiography revealed 100% occlusion of the right coronary artery (RCA). A stent was successfully placed and the patient is doing well. 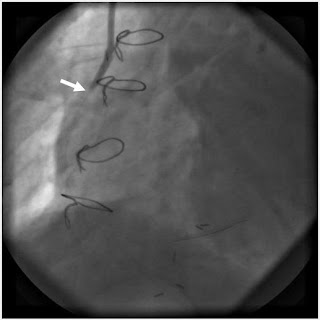 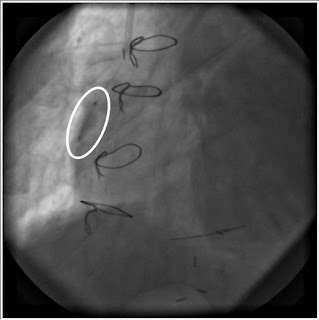 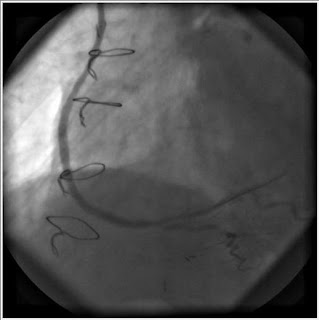 Everything is political. Except the work.