I know I promised to go over the voltage criteria for left ventricular hypertrophy (LVH) but I lied!

If you’re really interested you can check out the Wikipedia article HERE, the ECG Learning Center HERE, or Tom Evans’ crib sheet HERE.

Personally? I think it’s a distraction. As far as STEMI recognition goes, it misses the point entirely!

The ECG will either show a so-called “strain pattern” (or repolarization abnormality) or it will not! If it does, there’s a chance it will mimic an acute anterior STEMI.

Just because the voltage criteria for LVH is satisfied on a particular ECG does not mean that a secondary ST-T wave abnormality will be present! Even if it is, it will not necessarily mimic acute anterior STEMI.

What I’m trying to say (again) is this:

It’s far more important to recognize a strain pattern than it is to calculate the voltage criteria for left ventricular hypertrophy on a 12-lead ECG!

Having said that, I do know most of the voltage criteria for left ventricular hypertrophy, so I’m not trying to discourage you from learning. I just want to put it in context!

Let’s look at a couple of examples courtesy of my friend Tom Bernesser who is a paramedic in North Carolina. Both of these ECGs are actual “false positives” from North Carolina’s RACE program.

That means they presented with signs and symptoms consistent with ACS, acute STEMI was identified on the prehospital 12-lead ECG (including the computerized interpretive statement), the paramedic and the ED physician agreed the patient satisfied the reperfusion criteria, the patient was fast-tracked to the cardiac cath lab, and no culprit artery was found.

This is an atypical “strain pattern” with many typical features.

I suspect the possibility that leads V1 and V2 might have been accidentally transposed but that doesn’t really matter. For the purposes of STEMI recognition, the typical features outweigh the atypical features.

In the first place, you should immediately notice the “widened QRS-T angle” that is the hallmark of a secondary repolarization abnormality. You will notice the same finding for LBBB and paced rhythm!

Importantly, the degree of the secondary ST-T abnormality is, generally speaking (there are some caveats), proportional to the size (or amplitude) of the QRS complex in the opposite direction!

If you take nothing else away from this post, please learn this “trick”.

It’s really no different from the concept I demonstrated in the post called Wolff-Parkinson-White (WPW) – STEMI Mimic.

Take a look at this ECG and find the most severe ST-T wave abnormality.

Does the amplitude of the R-wave in the opposite direction explain it? No way! It’s even smaller than the QRS complex in lead II, and the ST-T wave abnormality in lead II isn’t nearly as severe!

What is the second-worse ST-T wave abnormality? Lead V3! Does the depth of the S-wave in the opposite direction explain it? Not really.

But wait! Are we certain we’re getting an accurate “read” on the amplitude of the R-wave in lead I and the depth of the S-wave in lead V3? 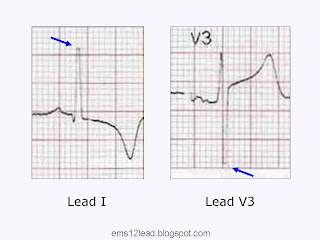 I suspect the possibility that the computer is “cropping” the QRS complexes to fit them on the ECG paper. See the little horizontal line that marks the “top” and “bottom” of these QRS complexes?

I’ve seen it many times before!

So ask yourself this question:

Generally speaking, does there seem to be a relationship between the QRS-complex and the degree of ST-elevation or depression in the opposite direction?

Using the new “trick” you have learned, what do you think of this ECG?

The Future of EMS Education