Let’s take another look at the 12-lead ECG.

The first update to the case is here: Update to 74 year old male CC: Chest pain

In the update I showed the right precordial leads “flipped” to help see the STEMI. 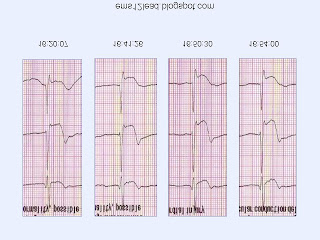 Here are the notes from the ED physician.

HPI text: This a 74 year-old white male reports onset of pressure in the anterior chest radiating into the left arm at approximately 2:15 p.m. today. He had just finished eating a large lunch with his wife and a friend. They were walking when the pain started. The pain has been persistent for three hours or more by the time he is brought to the emergency department by ambulance. The pain has worsened throughout the afternoon. His wife and friend both report that the patient was diaphoretic, weak, and at times blue in the lips. He seemed to be breathing heavily as well. The patient initially refused to come to the hospital stating that he was having indigestion. No previous history of coronary artery disease although treated for hypertension and dyslipidemia. Positive family history of coronary artery disease. The patient does not smoke cigarettes. No diabetes mellitus. The patient reports no back pain or abdominal pain. He has a history of chronic edema of the ankles. No previous DVT or PE.

General: No recent fever
Head: No recurrent headaches
ENT: No recurrent infections
Eyes: No recent infections
Pulmonary: No asthma. No recent cough.
Cardiovascular: Current chest pain. Hypertension. Dyslipidemia.
GI: No recurrent vomiting. No dyspepsia.
Neurologic: Awake and conversant. Generally weak without focal component.
Remaining review of symptoms reviewed and negative.
Exam
General: 74 year-old white male who appears diaphoretic and pale. He is awake and conversant. Blood pressure was 84 systolic when he arrived. He is clutching his chest and appears uncomfortable.
Head: No swelling or discoloration to the scalp.
Face: No facial swelling or discoloration.
Eyes: No scleral icterus.
Oral cavity: No lesions including tongue and lips.
Neck: No discoloration or swelling.
Chest wall: No deformities or tenderness.
Lungs: Breath sounds are symmetrical. There are a few dry crackles at the bases bilaterally.
Cardiac: Regular rate (62) and rhythm without murmurs, clicks, or rubs.
Abdomen: Soft and nondistended. Bowel sounds are active. Nontender. No pulsatile mass.
Extremities: The hands and feet are cool. Mild cyanosis of the fingertips and toe tests.

The patient was taken to the cardiac cath lab. The patient was hypotensive, developed acute respiratory distress, vomited x2 and at times became bradycardic into the mid-high 30s. Oxygen via NRB @ 15 LPM was required to maintain SpO2 > 90%.
Two stents were placed in the RCA (mid and distal).
The main lesion was in the mid-RCA; 99% stenosis with partial flow and partial perfusion. 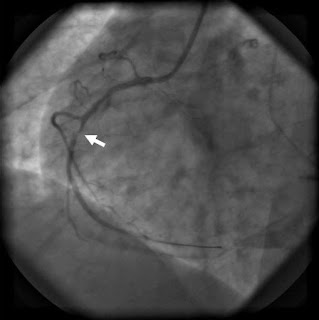 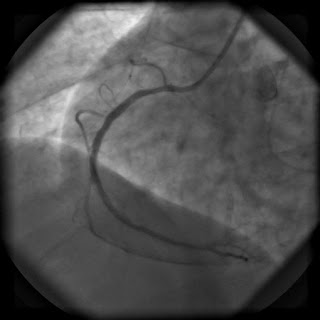 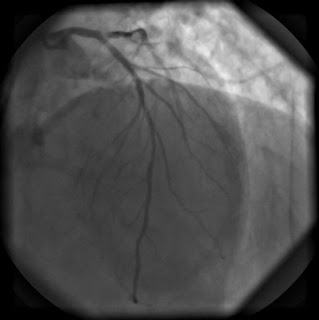 After the procedure an IABP was placed and the patient was sent to recovery.

The Future of EMS Education