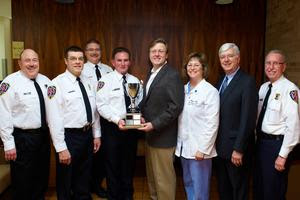 That’s the startling claim made in this report found at CantonRep.com.

The ST-segment elevation myocardial infarction award was given to the team for its role in the “door to balloon angioplasty” time of 9 minutes and 45 seconds. It is the fastest time ever reported for this procedure.

The award was presented during a continuing education unit meeting by Drs. Ahmed A. El Ghamry Sabe and Frank J. Kaeberlein, co-directors of Mercy’s ECPC.

The EMS-to-balloon (E2B) time was not reported.