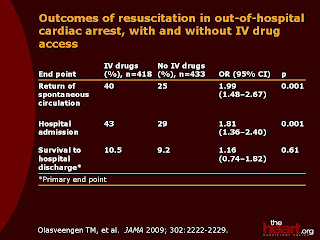 “[A] large randomized trial found that giving IV drugs like epinephrine and atropine in the setting of out-of-hospital cardiac arrest made it more likely that patients would be admitted to the hospital but little difference in whether they survived to discharge.

“That outcome was in spite of their undergoing resuscitation longer and receiving more defibrillations, and more often reattaining a spontaneous circulation, compared with another group that didn’t receive IV drugs during arrest.

“The trial is only the latest of several in recent years to reappraise the efficacy of major elements of conventional cardiopulmonary resuscitation.”

“The message for emergency providers is that, for now, the cornerstones of optimal cardiac resuscitation include high-quality cardiopulmonary resuscitation with minimal interruptions for anything, including any drug administration, and early defibrillation (emphasis added).”

“The quality of delivered cardiopulmonary resuscitation (including chest-compression rate, ventilation rate, and other factors), a prospectively defined secondary end point, was within guidelines and comparable in the two groups […] So was the prevalence of therapeutic hypothermia as part of management, which exceeded 70%. (emphasis added).”

Drug Use for Grownups