Let’s take a look at another case.

This was one of the first ECGs ever transmitted to my local receiving hospital on the Lifenet Receiving Station. It was definitely the first STEMI.

The data quality of the first 12 lead ECG wasn’t the greatest. This is the second ECG, with lead V4 in the position of V4R.

Unfortunately, I can’t seem to locate the details of this case. All I remember is that it was a male patient with chest pain.

This is an interesting ECG for several reasons.

But where are the reciprocal changes? Normally we’d expect to see something in leads I and aVL. In this case, we don’t even have so much as a flattening of the ST segment.

The only places I can see ECG changes that could be construed as reciprocal changes are in leads aVR and V1.

Is this a STEMI? I wouldn’t blame you if you gave serious consideration to another diagnosis like pericarditis.

It is a STEMI.

In fact, there appears to be about 1 mm of ST segment depression.

Is there right ventricular involvement?

The culprit artery isn’t even the RCA. It’s the circumflex (LCX). 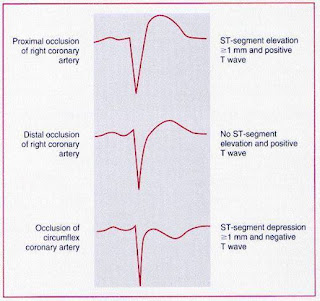 Take a look at the image to the right from an editorial in the New England Journal of Medicine by HJ Wellens.

You will note that lead V4R in this case looks almost identical to the third example, which indicates occlusion of the circumflex artery.

When I contacted the director of cardiovascular services at the hospital, he confirmed that the circumflex was 100% occluded.

If you remember your coronary anatomy from Part 1, it’s the right coronary artery (RCA) that typically supplies the right atrium and right ventricle before reaching the inferior wall of the left ventricle.

In a minority of patients, the circumflex (LCX) supplies the inferior wall of the left ventricle. Occlusion of this artery generally does not threaten the right ventricle.

So what have we learned? Is it always necessary to check the right sided precordial leads in the setting of acute inferior STEMI? Or at least lead V4R? It certainly isn’t going to hurt. I won’t discourage it.

I work in a busy ED and one day the medics brought in a hypotenisive patient with an inferior wall MI on their 12 lead. I asked the attending if she wanted me to do a 12 lead with V4R. Her answer which I heard from others was if it is inferior and hypotensive, consider it right sided and treat as such. However, after reading this post, I see the importance of checking the right side on a normotensive patient with an inferior MI. I am glad you are around. I just wish I didn’t have to keep reviewing your posts.

I tend to agree with the attending. I would simply include patients who are technically normotensive but on the low side of “normal” especially if they are bradycardic or “shocky” in appearance!

SoCal Medic alluded to another trick in a comment he left for Part 1.

I have been taught two different ways, the first by obtaining V4R and evaluating that for ST Segment changes and the second by comparing Lead II to Lead III.

You will notice that in Part 2, the ST-segment elevation is maximal in lead III over lead II (STE III > STE II). An examination of lead V4R confirms right ventricular involvement.

In this case, ST-segment elevation is maximal in lead II over lead III (STE II > STE III). An examination of lead V4R confirms that there is not right ventricular involvement.

Is it really that simple? Not exactly. STE III > STE II confirms that the culprit artery is the RCA. From there, you should suspect the possibility of RV infarction and treat accordingly. But it does not confirm right ventricular infarction. There is a study forthcoming from Stephen Smith, M.D. on this very topic.

Consider Eskola et al. How to Use ECG for Decision Support in the Catheterization Laboratory – Cases With Inferior ST Elevation Myocardial Infarction. Journal of Electrocardiography Vol 37 No. 4 October 2004.

Mask up for Overhaul