By now you should have a fairly good grasp of how the hexaxial reference system is derived from the first 6 leads of the 12 lead ECG.

Before we break down the finished diagram, let’s look at the hexaxial reference system laying on top of the patient’s anterior chest, with the arrows and leads in the position of the positive electrodes.

You will notice that leads III and aVL are on opposite sides of the hexaxial reference system. That’s why they are two of the most reciprocal leads on the 12-lead ECG. More on that later. Right now I’m just planting the seed.

You will notice that lead II cuts across the body in a “right shoulder-to-left leg” direction (white electrode to red electrode) which is the same direction as the heart’s normal axis. That’s probably why we were first taught to monitor lead II. It tends to show nice, upright P waves, QRS complexes, and T waves. 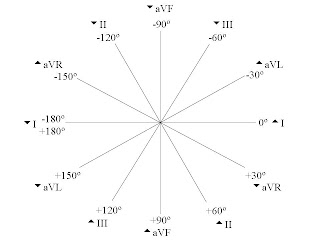 If possible, click on the image above, and print it out for reference.

I’m going to do something a little bit unconventional here. Before I break down the various quadrants of the hexaxial reference system and discuss the normal ranges, we’re going to use it to calculate the hearts QRS axis on an actual ECG.

After all, this is Part 4 and we haven’t looked at a single 12-lead ECG!

If possible, click on the above ECG, print it out, and lay it down next to the diagram of the hexaxial reference system.

For now, we’re only worried about the first 6 leads of the 12-lead ECG, because they are the leads that make up the frontal plane and the hexaxial reference system.

Now, let’s look at the first 6 leads in our sample. Can you spot the most equiphasic or isoelectric QRS complexes? If you said lead aVR, move to the head of the class!

Find lead III (-60 degrees to +120 degrees). The QRS axis is moving along the same vector as lead III. But is it moving toward -60 or toward +120? Go back to the sample ECG. Is the QRS complex positive or negative in lead III? It’s positive! You’ll also notice that lead III shows the tallest QRS complex in the frontal plane. Interesting! Now look at the hexaxial reference system again. You’ll see little downward arrow in front of lead III at -60 degrees and a little upward arrow in front of lead III at +120 degrees. The positive electrode for lead III is at +120.

The QRS axis should be around 120 degrees.

Let’s look at our computer measurements and see how we did. Go to the top of the sample ECG and look for P-QRS-T Axis. To the right you will see three numbers. The middle number is the QRS axis in the frontal plane. What does it say? 121 degrees.

We’re only off by 1 degree, in a 360 degree circle! That’s pretty darned good. Does it always work out that perfect? No. But you can almost always get it within 10 or 15 degrees.

Now look at the previous diagram of the hexaxial reference system laying on top of the patient’s anterior chest and find the positive electrode for lead III. You’ll notice that the vector points downward toward the patient’s right leg. Guess what? This is a right axis deviation.

Now, you may be thinking, “This is way too much work!”

This may be the first time you’ve ever used the hexaxial reference system, so of course it seems complicated, but it’s really not. In fact, I no longer require the diagram. Because I’ve done this so many times, some patterns have emerged that have simplified things for me dramatically.

In other words, there are some “tricks of the trade”.

In Part 5 I’ll show you some startling relationships between the standard 12-lead ECG and the hexaxial reference system that may change the way you look at 12-lead ECGs forever!