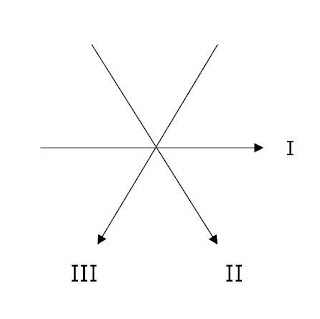 In Part 2 we discussed the heart’s mean electrical vector and how Einthoven’s Triangle (leads I, II, and III) can be redrawn to form the first 3 spokes of the hexaxial reference system. Essentially, we ended up with a shape like the one on the right.

When leads I, II, and III are drawn this way (as they often are) the arrows and Roman numerals are placed in the position of the positive electrodes.

(Maybe this is why Einthoven reversed the polarity of lead II!)

Don’t worry, by the end of Part III, we’ll be done with all the theoretical stuff.

To complete the hexaxial reference system, we now need to discuss the augmented limb leads: aVR, aVL, and aVF.

In the meantime, just know that leads aVR, aVL, and aVF are derived from the same 3 electrodes as leads I, II, and III. They just examine different vectors by combining two electrodes together to form the negative pole of each lead.

For lead aVL, the negative is a combination of the white (right arm) and red (left leg) electrodes. The positive electrode for lead aVL is the black electrode (left arm). This has the effect of making the vector for lead aVL point toward the left shoulder. 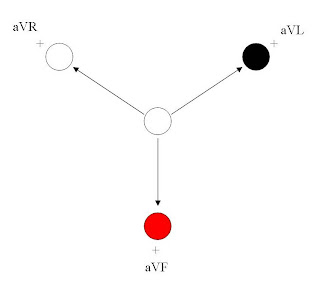 For the exact same reasons, we can draw a mathematical representation of leads aVR, aVL, and aVF that looks symmetrical like the shape on the right.

We have just completed the final 3 spokes of the hexaxial reference system!

All we have to do is lay the diagram of leads aVR, aVL, and aVF on top of the diagram we created for leads I, II, and III. When you do, it will look like the diagram on the bottom.

This is the hexaxial reference system! 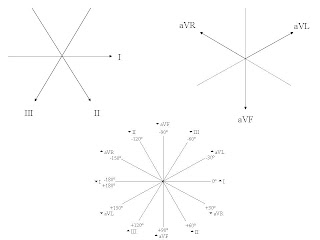 In Part 4 we’ll take a closer look at the hexaxial reference system and how it can be used to measure the heart’s electrical axis in the frontal plane.